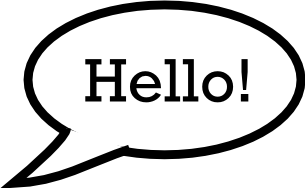 When learning a new language, one of the first things you learn is how to greet people. With English, you’ll be taught “Hello”, “Hi”, “Good morning”, “Good afternoon”, “Good evening” and perhaps “How do you do?” However, when you meet native English speakers, or watch English television programmes, you quickly realise that there are lots of other ways to say hello.

In many parts of the United States, and particularly the south, it’s more common to use “Hey” than “Hi” as an informal greeting. You can also use “Hey there”, “Hey man”, “Heya”.

In the rest of the English-speaking world, “Hey” is normally used to attract someone’s attention: “Hey, look where you’re going!”

An informal greeting similar to “Hi”, common in the UK.

An informal, shortened version of “How do you do?”, mainly used in the south-western United States. People will be surprised if you say “Howdy” in other parts of the world – they’ll think you’re trying to be funny, or that you’re pretending to be a cowboy!

This is American street slang, generally used between good friends.

Anyone who has seen the film Crocodile Dundee knows that Australians say “G’day”, but is it just a stereotype? In fact, people in both Australia and New Zealand do say “G’day”, although it is less common in big cities and amongst young people.

This used to be a very common greeting in much of the middle and north of England, and it is still quite widely used, particularly by older people. Other regional greetings in England include “Alright my lover”, “Hey duck” and “Alright Babby”. It’s useful to understand these phrases, but don’t use them yourself, at least until you have a perfect regional accent!

You can also greet people by asking a question. “How do you do?” is very formal, but there are lots of informal equivalents:

This sounds slightly old-fashioned and is a bit eccentric, but some people do use it. You can even say “Greetings and salutations”, which is a joking way of pretending to be very formal.

There are literally hundreds of other ways of greeting people in English, but hopefully this post covers the ones you’re most likely to encounter.